Every birthday or anniversary is significant, particularly for institutions like IIT Bombay (IITB). The 60th anniversary of IITB’s founding day, our Diamond Jubilee, is this special occasion that we have been celebrating at IITB over the past year. A Diamond Jubilee comes at a critical juncture in the history of an institution that has just celebrated the Golden Jubilee in a grand manner only a decade back, and where the upcoming Platinum Jubilee and Centenary celebrations shimmer enticingly ahead.

Sixty years is but a short time in the history of any university or institute when compared to the many centuries that many leading educational and research institutions of the word have endured. Still, in these short 60 years, IIT Bombay has proven to be the leading Institute of India on many fronts and that of the World too. Therefore, when the IITB leadership decided to celebrate the Diamond Jubilee, a conscious effort was made by them to initiate a few key events and activities from amongst the many that the IITB-DJ Celebration Committee had suggested. It was decided that these events and activities would be executed through various Task Forces (TF) led by Institute functionaries like Deputy Directors, Deans and Heads, and, moreover, they would be funded internally without any special fund raising efforts, but with special emphasis to introspect, to assess impact, and to reconnect to all stakeholders.

To mention just a few of the events and activities, here is a short list: a Task Force led by the Dean (Alumni and Corporate Relations) had very successful series of reunion meetings for alumni in several cities of India and also in the USA; a Task Force led by the Dy Director (AIA) facilitated a series of marquee conferences that every Department and Centre of IITB could take advantage of. These were meant to take stock of where the Departments/Centres currently were, academically and research-wise, and where they wanted to be in the next decade. A task force led by the Dean (IPS) re-examined long-pending infrastructure projects and reprioritized several like the community centre and crèche-expansion that would benefit all campus residents. A TF led by Dy Director (FEA) and Registrar initiated a scheme for scholarships to staff children; a TF led by Dean (SA) organized several social and cultural programs, and added special activities or events to the traditional ones; a TF led by Dean (R&D) organized a TedX event on campus; other TFs organized activities for students at the KV and Campus schools on campus; the Central Librarian organized activities like story-telling for campus kids; and a TF led by the Director began a significant study into the economic and social impact that IITB has had over the last sixty years. This impact survey and report would in itself be a landmark lasting outcome of IITB’s Diamond Jubilee celebrations. 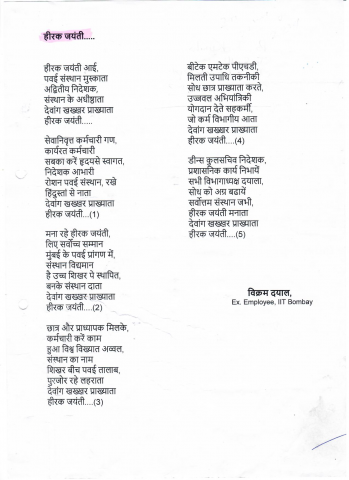