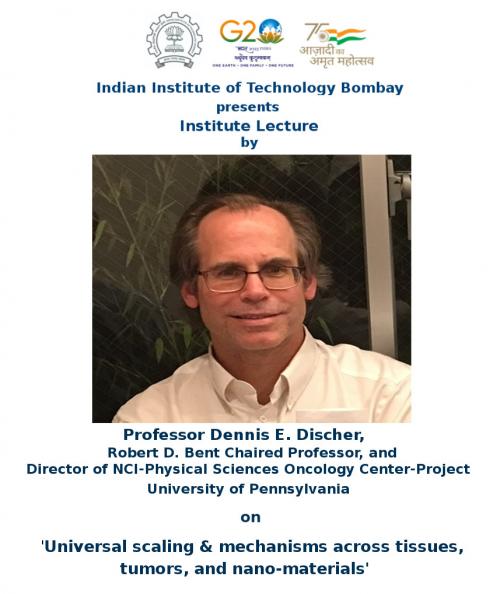 The Indian Institute of Technology Bombay is organizing an Institute lecture on January 30, 2023.

The details of the lecture are given below:

About the speaker: Prof. Dennis E. Discher began at Penn in 1996 after a PhD at UC Berkeley & UC San Francisco and following an NSF Fellowship in computational biophysics in British Columbia. His lab focused first on membrane biophysics and polymer mimetics, and then discovered matrix elasticity effects on stem cell differentiation and nucleus mechanosensing. Recent efforts are focused on the mechanobiology of DNA damage and genome variation, as well as ‘self’ pathways in macrophage attack of solid tumors. He is an elected member of the US National Academy of Medicine, the US National Academy of Engineering, the American Association for the Advancement of Science, and on the Editorial Board of Science.

Abstract: Moonshots in biology over the past decades have generally exploited developments in sequencing to produce many publically-accessible and standardized pan-tissue datasets for life’s polymers (proteins, RNA, DNA). In parallel, the rise of synthetic polymers as materials and energy sources has led to a general understanding of such synthetics exemplified by many nonlinear scaling laws. As we illustrate some of the latter in contexts such as nanoparticle vaccines, we will take an ‘information age’ data-mining approach as foundational to the hypothesis that polymer-type scaling concepts apply to fundamentals of animal form and function. Insights and experiments on biomolecular mechanisms will focus on key organelles such as the cell nucleus and processes such as DNA damage/repair and tumor growth, with applications to cell therapy.