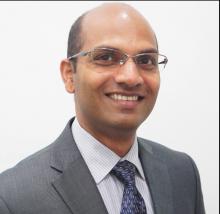 Abstract: Innovative approaches to translate basic nanomaterials research into real-world products are critical for our future. Nanotechnologies can deliver successful energy, environment and health solutions - such as converting carbon dioxide into clean fuel with only sunlight and water, developing innovative devices for energy storage and conversion, and designing next-generation drug delivery system for cancer treatment. In this talk, I will present the development, capabilities, and current and future applications of nanotechnology for various fields including clean energy generation and carbon capture. Much focus will be given on the design of novel advanced nano-porous architectures for the next generation clean energy storage and conversion system with the easily available resources including sunlight, water and CO2. At the end of the talk, I will present how the nanotechnology can be effectively utilized for the advanced drug delivery systems for cancer treatment.

About the Speaker: Prof. Vinu is currently working as a Global Innovation Chair Professor and Director of Global Innovative Center for Advanced Nanomaterials at the University of Newcastle. Prior to this, Prof. Vinu was also working as a Full Professor of Nanomaterials, at the Future Industries Institute, University of South Australia, Mawson Lakes, Australia and a Full Professor and ARC Future Fellow at the University of Queensland, Brisbane, Australia during September 2011-2017. Before moving to Australia, he had been working as a senior researcher at the National Institute for Materials Science (NIMS), Tsukuba, Japan since 2006 after he had successfully completed two years of the ICYS fellowship at the same institute and a few years of research at the Technical University of Kaiserslautern (TUK), Germany. Although Prof. Vinu registered his PhD at Anna University, he performed most of his PhD work at the TUK, Germany (2000-2003). During these 20 years of research, Prof. Vinu has made a significant contribution in the field of nano-porous materials and their application in sensing, energy storage, fuel cells, adsorption and separation, and catalysis.