We have all seen tiny black particles rise from a campfire flame. These particles, called soot, are formed when the fuel doesn’t burn entirely. When fuel burns properly, a blue flame is seen, whereas the flame is yellow when the soot is formed during burning and it becomes hot. Soot can cause cancer and respiratory and cardiac disorders. Soot can also reduce the life of machine- parts. For example, in gas turbines, soot depositing on blades causes corrosion and makes heat dissipation difficult.

Researchers study how soot is formed and measure the quantity of soot under various conditions, such as varying amounts of air for different fuels. The data helps designers minimise soot and design better combustion-based devices such as internal combustion engines, like the ones used in our cars. Even small amounts of soot can cause damage, but it is difficult to measure small soot volumes accurately. In a recent study led by Prof Neeraj Kumbhakarna, researchers from the Indian Institute of Technology Bombay (IIT Bombay) demonstrated a new technique to effectively reduce measurement errors when soot is present in low amounts. This study was published in the Journal of Aerosol Science and jointly funded by the Industrial Research & Consultancy Centre, IIT Bombay and the Indian Space Research Organization (ISRO).

Researchers analyse digital camera pictures of burning fuel to guess the temperature of the fuel and use the information to estimate the soot volume. Collecting and weighing the soot and studying a light beam shone on soot particles are some other methods to measure the amount of soot. The current study uses the last method. The researchers passed a beam of red laser light of a specific frequency, through a droplet of burning fuel and took images as it burnt. The light falling on the camera also contains the light from the burning fuel. The researchers used a narrow band filter to let only the laser light pass and filter out the light emitted by the burning fuel. “When a flame having soot particles is shone with light, called background light, the particles absorb and scatter some of this light, so light reaching the camera is less bright,” explains Dr Anand Sankaranarayanan from IIT Bombay, who is a co-author of the study.

In the current study, the researchers predicted the brightness of background light at every moment instead of using an average. They observed the flickers in background light at areas present outside the flame of the burning fuel, where there is no soot. They used it to estimate the background light falling on the soot particles. “Using our new data processing technique, we got lower errors, especially when the amount of soot produced is low. Our technique does not require any additional equipment or extra expenditure, which is an added advantage,” says Dr Sankaranarayanan.

To further reduce errors in the experiment, the researchers passed the laser light beam through a fixed and a rotating diffuser- a glass sheet that scatters light- before the light was incident on the burning fuel. A diffuser gives an evenly bright light and avoids the many speckles in the camera image. Speckles need to be removed while processing the data, leading to a loss of information.

The researchers also validated their data processing technique. They used it to calculate the amount of soot for some previous measurements reported in the literature and verified the results. They also qualitatively checked their experimental observations. They burnt a droplet of toluene (a carbon-based fuel) and compared their experimental observations with that in the literature. “We observed a similar peak value of the amount of soot. As expected, we saw high amounts of soot  slightly inside the outer edges  of the flame, where temperatures and fuel concentration are high,” describes Dr Sankaranarayanan. 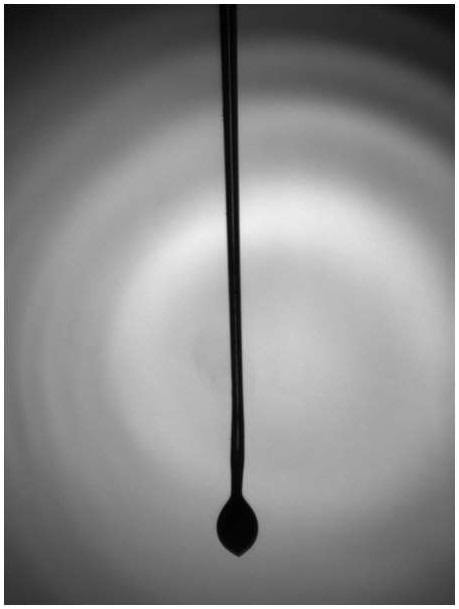 A fuel that usually produces low amounts of soot, when burnt incompletely without sufficient oxygen and air or with little time to burn, can give high amounts of soot. “For practical combustion devices, there is a range of operating conditions where soot is not formed and a range where soot formation suddenly starts happening. So if we were to use a similar setup for analysing the conditions in which there is a transition from no soot to very low soot to high soot, this study could be useful.,” feels Dr Sankaranarayanan. “This is useful to design better devices and identify the right operating conditions so that formation of soot is minimal,” he signs off.