A new approach to film atoms and molecules vibrating inside solids

Theoretical and experimental scientists have come together to watch solids vibrate.

Atoms or molecules constitute everything around us. In many solids, like common salt or iron, they are neatly arranged as repeated structures, called „crystal lattices‟. The behaviour of a solid to any external factor, like applied force, is determined by the collective behaviour of the lattice, not individual atoms or molecules. Small vibrations of the constituents determine the collective response of the lattice. Instead of the individual constituents, it is this collective response that determines various natural phenomena, including how heat transports through solids and how materials change states between solids, liquids, and gases.

In a new study, researchers from the Indian Institute of Technology Bombay (IIT Bombay) have devised a theoretical method to predict variations of the lattice structure in response to external disturbances. This study, published in the journal npj Computational Materials, was partially funded by the IIT Bombay-Industrial Research and Consultancy Centre, the Ministry of Human Resource and Development (now Ministry of Education), Department of Atomic Energy, and the Department of Science and Technology, Government of India.

Scientists probe variations in the lattice structure, or its dynamics, by first creating an external disturbance on the structure and then observing how the disturbance changes with time. The disturbance is often induced by short flashes of laser light. “If you disturb a solid by flashes of laser, its atoms start vibrating,” says Prof Gopal Dixit, one of the authors of the study.

X-ray light or electrons can reveal the information about the position of the atoms and molecules in the lattice. Scientists bombard the solid with multiple X-ray or electron pulses at instances separated by a few femtoseconds –– that is, one thousand of a trillionth of a second. Thus, they can obtain images of the solid at these instances, which they stitch together to film the vibrating atoms. Such experiments are challenging to design, involving sophisticated instruments that are more expensive than standard laboratory microscopes and available in a few, rare facilities around the world. Only in the last decade have scientists been able to conduct such advanced experiments. 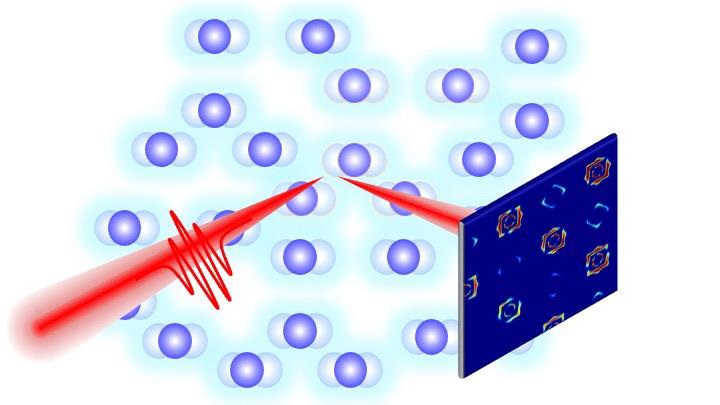 An incident X-ray or electron pulse hits the sample, thus creating atomic vibrations. The response of the solid to the incident pulse is seen by the detector, an X-ray or electron camera. [Image Credits: Aditya Prasad Roy, Department of Mechanical Engineering, IIT Bombay, an author of the study]

On the other hand, studying the molecular arrangement of undisturbed solids is easier. For more than five decades, scientists have bombarded solids like silicon with X-ray or electrons beams and observed how this beam interacts with its lattice. “The response of the solid to the beam leaves specific imprints on the outgoing beam, revealing the atomic vibrations in the lattice,” says Prof Dipanshu Bansal, another author of the study. An innovative mathematical technique first invented by Joseph Fourier, called ‘Fourier analysis’, helps them in studying the small structures of the lattice in both space and time.

In the current study, the researchers carried out mathematical calculations and demonstrated that one could use a similar technique to study solids subject to a temporary, external disturbance. They used an extended version of Fourier’s method along with the laws of quantum physics. Additionally, they used the fundamental idea that time flows in one direction. These led them to calculate a mathematical quantity which determines how the lattice structure reacts to the external disturbance.

Using this mathematical quantity, also called the „response function‟, the researchers predicted how solids would behave in time, down to a few femtoseconds, and space, down to fractions of a nanometre. Then, they calculated the response function from images available from experiments conducted over the last decade with lasers. This quantity, the researchers of the current study demonstrated, exactly matches the theoretical response function. Their calculation shows for the first time that there is no need to carry out the sophisticated experiments to study the dynamics of solids.

There are other advantages. “Our proposed method does not require separate X-ray or electron pulses separated by fractions of picoseconds to study the dynamics. Instead, a single pulse is enough,” asserts Prof Dixit. The calculations take only a few days on personal computers, whereas the experiments can take days to months.

The study has also brought together theorists and experimentalists. “Our work is a real success of collaborative efforts,” says Prof Bansal, an experimental scientist. “We needed the insight into the exact experimental conditions that were unexplained by theory, and theoretical physicists to rise to the task,” adds Prof Dixit, who is a theorist. “Although there are challenges in conducting experiments, the theoretical calculations have no limitations,” admits Prof Bansal, the experimentalist.

The researchers assert that their method is applicable for solids in different environments like in a magnetic field, under external pressure, or high temperature. “This is not possible via even the most sophisticated microscopic experiments,” says Prof Bansal. While it is not easy to estimate the response function from the limited data available in experiments, rapid technological advancements are making it easier to conduct investigations. The researchers are planning to put their theory to the test for these experiments too.